This Is What ‘Unlimited Data’ Looks Like On AT&T 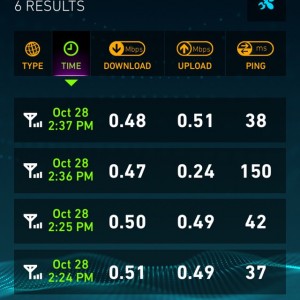 I’ve been an AT&T customer for over 10 years. Back when they were AT&T Wireless, which was before Cingular. The only, and I mean only reason I’ve stuck around was because of my Unlimited Plan.  That, and the fact they would allow me for early upgrades for the new iPhones every October. Since they eliminated the early upgrade promo when the 5S came out, the only reason to still stick around was for the unlimited data.

In the past I’ve read about AT&T throttling data to it’s highest usage customers, but I’m generally on wifi and it’s never really been much of a problem…  at least enough of a problem for me to dig a little deeper. That was until today… everything was like going through mud. Checking my bank account felt like an eternity. Loading an image attachment in mail? Impossible. This along with reading that the FTC is suing AT&T for it’s deceptive practices made me dig a little deeper…

The image to the right is a screenshot of my data tests using the speedtest.net app on my iPhone 6 on “LTE” in the middle of Midtown Manhattan today.

Gee I wonder what my data speed is capped at.  Anyone have similar experiences?

The cell phone in all its iterations — from pre-paid to smartphones — has become common throughout the world. According to the United Nations’ t...

How to Care for an External Hard Drive